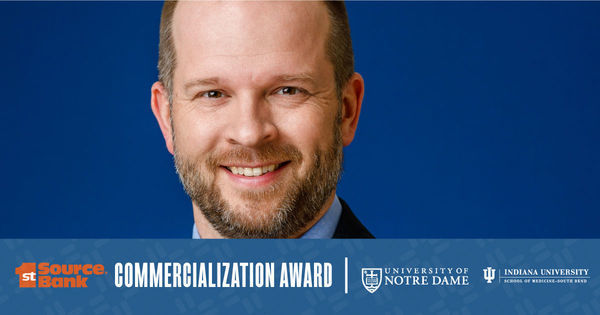 Working in a laboratory with rats and mice is pretty common for a research assistant professor of Biological Sciences. Launching a startup that solves a significant problem for academic and commercial research labs around the world is not.

That’s exactly what Matthew Leevy, now director of the IDEA Center Innovation Lab, did in 2013 when he and his student lab workers designed a new type of vacuum manifold to deliver anesthesia to rodents while stopping nearly 100 percent of potentially harmful waste gas from infiltrating the lab air space. The technology results in a safer work environment for researchers and lab technicians and a more ergonomic experience for rats and mice.

“Many of the experiments in my lab at the time involved putting rodents under anesthesia before placing them in instruments for CT scans, PET scans and other imaging. We ran these experiments all the time, so the lab had a musty smell—not from the animals, but from the isoflurane anesthesia,” explains Leevy. “It was a cause for concern.”

Isoflurane is a clear, colorless liquid with a mildly pungent odor. While there are no specific work exposure limits established for isoflurane, the National Institute for Occupational Safety and Health Administration recommends precautions be taken to avoid overexposure. Failure to do so can lead to headaches, dizziness, respiratory irritation and in extreme cases, unconsciousness.

Leevy and his team started a new round of experiments, this time to design a vacuum manifold for delivering anesthesia strictly to lab mice and rates and not the atmosphere. Eventually, more than 100 prototypes were created using a 3D printer. The last version made was nearly perfect; it removes 99.99 percent of leaking gas while keeping the animals safely anesthetized and comfortably lying flat throughout experiments.

Eager to show off the device, Leevy met with representatives from global anesthesia company Patterson Scientific at an imaging conference in the fall 2013. By the end of the conference, a Patterson representative approached him with an unexpected offer: a $50,000 verbal commitment to acquire 100 of the vacuum manifolds. Not one to look a gift horse—or rat—in the mouth, Leevy said yes.

“At that point, we didn’t have a company, but we did have an order. Life was a whirlwind after that,” Leevy says. From there, Leevy and three partners founded In Vivo Concepts, LLC around the technology. A formal purchase order arrived soon after.

Bootstrapping from the founders plus the 50 percent advance from Patterson took In Vivo just so far. Winning the 1st Source Bank Commercialization Award in early 2014, an honor that came with a $20,000 check, helped In Vivo reach a major milestone: delivery of its first commercial order.

“We plowed the 1st Source money straight back into the company,” says Leevy.

The investment paid huge dividends. In late 2017, Somni Scientific, which supplies equipment and services for veterinary and research anesthesia, purchased 52 percent of In Vivo. The deal brought cash and a hyper-charged distribution channel. Somni now sells a full range of In Vivo products to global and regional pharmaceutical companies. In Vivo continues to sell its products online and through distributors to academic, contract and corporate research labs.

Leevy admits he was surprised that a novice entrepreneur such as himself could win the 1st Source Bank Commercialization Award given the talent of other Notre Dame faculty. Based on this success, he has gone on to start four other companies, including Benefactory, which makes high-end gifts for university stakeholders and TipSwift, which enables cashless tipping to increase the take-home pay of service industry workers.

His motivation for starting companies? “I have the entrepreneurial bug!”

Originally published by Melanie Lux at ideacenter.nd.edu on February 18, 2020.