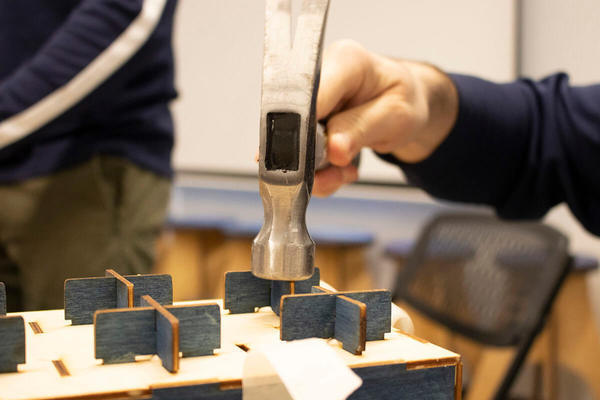 What first got you interested in working in the Fab Lab? How did you get started on this project?

I previously ran a company in high school and college, where I handcrafted bespoke wooden clocks, bowls and pens. When I moved over to the US, I wanted to keep doing something along those lines. I reached out to Matt Leevy from the Innovation Lab who happened to have a new project he was working on; it was perfect timing. Myself and Jeff were very happy to get involved in it. Matt had come up with the idea for Blockify, but didn’t have enough time to dedicate to it. That’s where our involvement in the project started.

We create modular flat-pack wooden blocks that can be used to assemble furniture, desks and walls.  It’s a very adaptable concept that can be taken down a few different paths, but we decided to focus on startup offices as our beachhead market. Startups are very dynamic environments that need to be collaborative. Office space should mimic the constant change that startups undergo and adapt as the needs of the company change, which is where the flexibility of our product comes in. Other avenues that were considered included producing easily assembled homes for people in developing countries. It’s a very exciting idea, but being based out of Innovation Park made startups the perfect market to start with.

Who's on the team right now?

The Blockify team right now consists of Matt Leevy, Jeff Riney, Ryan Kreager and myself. Because it’s a startup, we don’t have any defined roles yet - we only started about 3 weeks ago so we’re still deciding the direction to go with the company. Matt is very much experimenting with the design and build of the blocks because he’s based in the Innovation Lab. We’ve gone through a few iterations of the blocks based on feedback from workshops and potential customers. Jeff and I pitched the company last week to the IDEA Center, which was interesting because I’m a Venture Coach and usually I’m on the other side listening to the pitches. We have been busy brainstorming the beachhead market to go through, as well as the design of the logo.

We also ran a workshop for the Office of Business Development at Notre Dame, where we invited their staff in to tour the lab and make some blocks and gadgets. We got a lot of feedback from this.

By getting more involved with the manufacturing we will be able to fulfill upcoming orders.  Ryan Kreager from the IDEA Center is working on a website that will help move the company forward.

What were some of the challenges you found while working on this?

I think one of the main ones is that in the beginning of a startup, everything is a decision. We iterated over the name a few times, the market we were going to target as well as the design of the blocks. These blocks can serve so many functions like housing, sheds, couches, bed frames, desks, storage, and many others, that choosing one main market took a bit of discussion. You don’t want to choose too narrow a market but you also don’t want to spread yourself too thin either. Then we had to consider the design of the blocks themselves. So actually being able to make them easily assembled by regular people was pretty tough, but the incredible Matt Leevy took care of that.

I think that the main challenge is just getting a consensus from everyone as to the strategy going forward - as I mentioned, we have so many avenues to go down with this that we wanted to decide as a team and go full charge down one path instead of spreading ourselves too thin trying to chase multiple markets. The team meet every week and we have very productive meetings. We go in with a mindset to just get as much done as possible, and it’s been working well for us. So far things are going well and it's been very interesting!

What are the next steps?

That's another thing we've discussed. We're hoping to potentially bring someone on to the team that could run this after myself and Jeff graduate. We’re also thinking about entering Race to Revenue, and we’re thinking of bringing another member onto the team to do that.

In terms of long term strategy, we want to focus on getting our product to market, and we also have some interesting things planned for IDEA Week in April to showcase just how versatile these blocks are. We’re talking with different people in startups, with the aim of doing some pilot projects to show how our blocks in action. That way, we can also get some product photography so we can sell online once the website is up and running.

Ultimately we need to balance our social mission with the need to make a profit from this company. We’ve discussed doing a partnership where, for example, for every 10 blocks we sell, one is donated to third world housing or some sort of homeless shelter. Of course, the details of that really need to be talked about, and there's a lot of things we need to consider there but we feel there are really exciting ways to give back and make this something that contributes to the greater good.