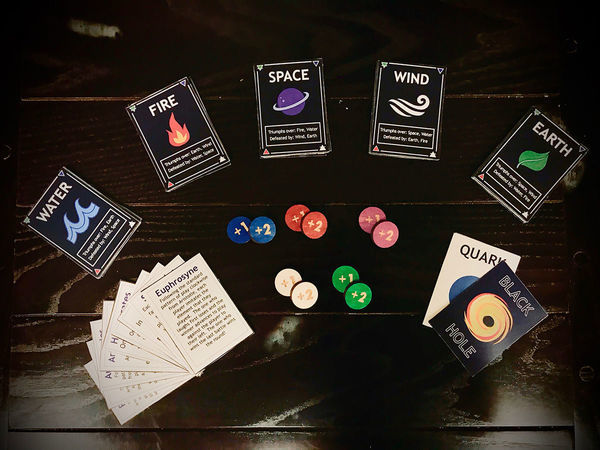 The Lab helped this student venture design and create their game tokens. Read the whole story:

Did someone say chemistry office hours? That is precisely where first-year students Sarah Wells, Margaret Kilbane, and Caroline Kaczmarek came up with the idea for a strategic card game they have called Aristotle’s Elements (and Space!). They laugh describing what ensued after departing office hours together that day. “We went home to our dorm and started making cards for our game, and our friends were convinced we were taking this too far,” says Sarah. “They were all very confused. We were suddenly talking really fast and telling one another ‘you get colored pencils, we’re going to make this work.’” Today, their positive spirit and immense passion for their game remains wholly apparent.

The 3-4 person card game revolves around Aristotle’s four elements – air, earth, fire, water – and his “ethereal” fifth element, space. This fast-paced game which began as a rock-paper-scissors concept, has evolved to include card-stealing and power-ups. Unsurprisingly, the three girls all come from science backgrounds including Mechanical Engineering, Biology, and Pre-professional sciences. However, what has surprised them was just how welcoming the IDEA Center was to their non-technical, non-scientific venture.

When Sarah first heard about the IDEA Center, she was excited by the work they were doing, but her first reaction was “oh, I don’t have a cool engineering idea.” Only later down the road did she realize that it was not necessary to have a technical idea. Now having worked closely with the IDEA Center and pitching to the Student Pipeline, Sarah remarks, “People think when you go to the IDEA Center you have to have a technical idea that is going to change the world. When people hear about our game, they think, ‘oh it’s just a game,’ but we’re so excited about it. It could change someone’s day.” In addition to serving as a source of entertainment, the girls have considered another application ‒ a stimulating activity for individuals with mild cognitive disorders. “It could help to keep that mental cognitive activity intact,” Sarah explains.

I asked them what made them decide that they wanted this game to become something more than an idea they brought back from office hours. “All three of us at one point in our lives had been really excited about something and had wanted to see it come to fruition but had never really had the resources to make that happen. So when the three of us came together and had this idea we knew it could become a reality,” says Caroline. The girls not only value the resources they have been given, but they fundamentally understand the power of entrepreneurship in bringing people together. “I loved the idea and being able to spend time with my friends,” says Margaret. “There is not a lot of time when you can sit down and say ‘let’s do something together.’”

They also recognize the value in branching outside of their current academic field. “It seems like a lot of people with different majors can incorporate their majors into more business and entrepreneurship stuff which is something I would love to do with my major,” says Sarah. Margaret discusses what it has been like to expand her way of thinking beyond the sciences and adopt a new perspective: “[Typically], you have to think about science in a very detailed way. In business ‒ Sam (our venture coach) always stresses ‒ the details are important but so is the big picture. It is almost like [using a] different mindset and [it is] one that is interesting to learn.” Caroline adds, “because I’m not a business major, I never thought I would be engaged with it like I am today. To be here where people are passionate about business and entrepreneurship, it is an amazing environment to see how much they want to help you.” Their venture coach, Sam Cowdery (ESTEEM ‘20) who is working on a board game venture himself, was eager to take on the girls’ project. The girls talked about how the pitch-preparation process was nerve-wracking at first, but how ultimately the results were more than just funding. “[The IDEA Center staff and venture coaches] had ways that they could help us. They suggested ways to do more networking and continue to grow.” The funding they received has helped them develop a more sophisticated prototype and host testing events around the area.

I would be remiss to look past the fact that this is a team of highly-motivated, all first-year students working above and beyond to push their venture forward. However, Caroline reminds me that it is all still very much a discovery process. “I want to be a doctor, a writer, and maybe do something with history. I feel like the more I do different things, the more I realize how many different ideas [can be] incorporated into one idea. The skills I am going to develop here, I am going to use.”

Originally published by Lillian Piz at ideacenter.nd.edu on March 23, 2020.